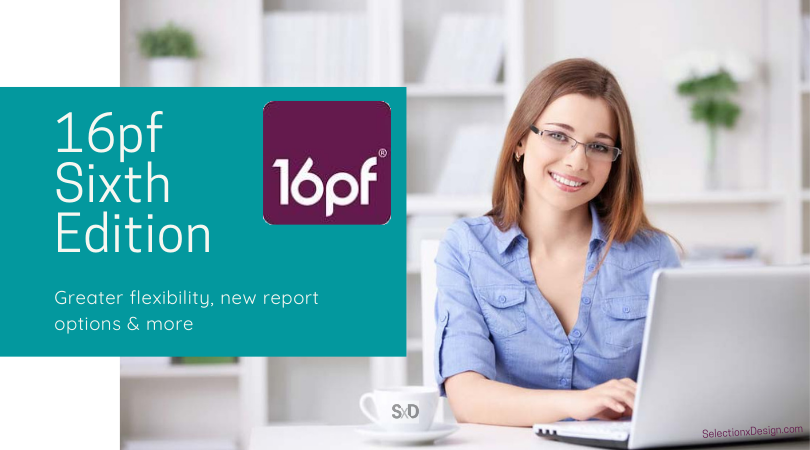 The 16pf Sixth Edition is now available, offering an appealing, fresh means of measuring personality and using assessments for employee selection and development. The newest version maintains the well-established factor structure and highly regarded features of the Fifth Edition. At the same time, the Sixth Edition offers an improved candidate testing experience, along with greater flexibility and options for using assessment results.

A Brief History and Development of the 16pf

Raymond Cattell developed his measure of 16 personality factors to account for full domain of personality within a non-clinical range. The hierarchical structure of the 16pf model was uncovered through factor analysis and is strongly rooted in careful and scientific measurement. The 16 primary factors represent lower order traits. Re-analysis of primary factors lead to the emergence of 5 higher-order, or global factors (Cattell, 1946). Cattel’s five global factors represent the “Big 5” (Goldberg, 1993) often referred to within personality testing today (e.g., Costa & McCrea, 1985).

Regardless of level, all factors are measured along a continuum. Most persons will score in the mid-range of each dimension, with less common scores at either extreme end. Factor scores are reported in units of stens.

Changes with the most recent Sixth Edition include (PSI Services LLC, 2018):

Since 1993, the ways in which persons communicate and socially express themselves have evolved. Shifts in regular activities, use of technology, values and focus occurred. The personality statements in the Sixth Edition reflect these types of changes. Dated items were revised or omitted. In addition, content of the Sixth Edition has been developed and carefully reviewed to avoid cultural, racial and gender biases having an impact on scores.

The response format is now consistent across the 16pf personality items. Answers are provided by choosing one of five Likert type responses, ranging from strongly agree to strongly disagree. For example, to what extent does one agree that it is important to adhere to rules and laws? If the person neither agrees nor disagrees, they are asked to select the middle, neutral response. Previous versions of the 16pf included 3 response options, with wording that varied across items.

The personality items themselves have been structured to measure simply and succinctly in the Sixth edition.

3. Shortened scales and number of items.

The Sixth Edition maintains the 15 personality factor subscales from the Fifth Edition, but the number of items per scale has been reduced to approximately 10. A total of 155 items make up the 16pf, with 5-6 response style indicator questions that cover Impression Management and Infrequency. This allows the full assessment to be completed more quickly than before. The strong psychometric qualities of the subscales however have been retained.

With the Sixth Edition, the Reasoning or Factor B items are presented through computerized adaptive testing. Each person receives between 10 and 20 reasoning items to complete. The questions are individually tailored to the person’s progress and responses. Answers are indicated by either selecting from three multiple choice options, or by entering a value. Adaptive testing offers the potential advantages of increased measurement efficiency and precision. It also provides greater assurance of security.

The Sixth Edition is administered online and can be completed from any device with good internet access. It typically takes 20-30 minutes to complete, a reduction of about 10% in time requirements compared to the 5th edition.

Computerized scoring is used exclusively with the Sixth Edition. For those with experience in hand-scoring 16pf assessments from the Fifth Edition, this may be an especially welcomed change!

A wide variety of reports are available with the present version. These range from focused score and profile presentations to in-depth narratives available for audiences from professional to lay-person. A series of competency reports are available, with scores on 20 distinct proficiencies to choose from. Recently added are reports that measure leadership during crisis and recovery, managing remote teams, and individual capacity for remote work (Details on each report are available here.)

The sample used to construct standardized scoring for the Sixth Edition represents the US general population based on 2015 census data, across sex, race, age, educational, and geographic variables.

What has remained consistent since the Fifth Edition?

Some of the key consistencies between the Fifth Edition of the 16pf and the 2018 revision include:

Will I understand the Sixth Edition reports if I used an earlier 16pf version?

You will be able to follow and interpret the Sixth Edition computerized reports even if you were trained on the Fifth Edition of the 16pf.

The Sixth Edition reports offer both graphic profile presentation and narrative explanation. Results are clearly illustrated and easily read by anyone trained in using the 16pf.

Computerized reports were an optional alternative to hand-scoring with the Fifth Edition. The structure and layout of the Sixth Edition reports is very similar. A wider variety of reports are available with the new version.

Do I need to be re-trained to use the Sixth Edition if I worked with the Fifth Edition?

The Sixth Edition has retained the scoring methods, factor definitions and structure, and the response style indicators that were used in the Fifth Edition. You will find the presented profile and scoring graphics nearly identical to those used previously, ensuring readily interpreted results for those who were experienced in using the Fifth Edition.

Selection by Design is pleased to offer introductory details on the Sixth Edition to present, past and new clients and test users. For those just learning to work with the 16pf, options include our 16pf Specialization training and our BPS/EFPA Test User: Occupational Personality training. Please get in touch to find out which course best suits your needs.

“I have thoroughly enjoyed this course. I feel that the standard of course delivery was excellent. The environment created by both Barbara and Conor was open, informative and promoted individual participation. I would fully recommend this course.” – Anne-Marie Kelly

This website uses cookies to improve your experience while you navigate through the website. Out of these, the cookies that are categorized as necessary are stored on your browser as they are essential for the working of basic functionalities of the website. We also use third-party cookies that help us analyze and understand how you use this website. These cookies will be stored in your browser only with your consent. You also have the option to opt-out of these cookies. But opting out of some of these cookies may affect your browsing experience.
Necessary Always Enabled
Necessary cookies are absolutely essential for the website to function properly. This category only includes cookies that ensures basic functionalities and security features of the website. These cookies do not store any personal information.
Non-necessary
Any cookies that may not be particularly necessary for the website to function and is used specifically to collect user personal data via analytics, ads, other embedded contents are termed as non-necessary cookies. It is mandatory to procure user consent prior to running these cookies on your website.
SAVE & ACCEPT